The clinic is the product of a partnership between Santa Clara County and Stanford University's Center for Youth Mental Health and Wellbeing. Together, they plan to open two clinics — one in San Jose and one in Palo Alto or Mountain View — to make mental health services more accessible to young people ages 12 to 25 years old. The clinics plan to focus on early prevention and intervention for young people with mild to moderate mental health issues, but with close relationships to services for youth with more severe mental illness. Services will be provided at no cost and regardless of health insurance status.

The clinic, which has yet to be named, is inspired by a model in Australia called headspace, which provides early-intervention services — from physical and mental health to alcohol and other drugs, work and academic issues — to young people at low or no cost. There are similar youth mental health centers in Canada and Ireland, but none yet in the United States.

The team behind the local project hopes, ambitiously, that Santa Clara County's would be the first of many such centers across the state and even the country. 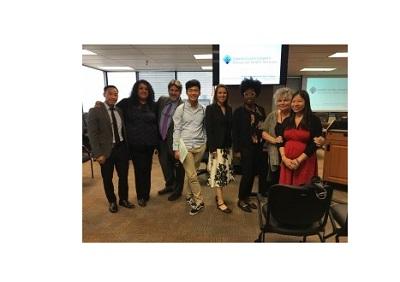 "We're in the innovation capital of the world," Toni Tullys, the county's Behavioral Health Services director, told the mental health commission in Sacramento. "What we're trying to do right now with Stanford and the community is to be just as innovative in mental health as we are in tech. It requires some bold, bold moves."

The state funding is specifically for "innovative" projects that evaluate "new best practices in mental health services" and have a defined time period. The commission approved four years of funding for this project.

All of the nine commissioners present on Thursday voted to approve the funding. They expressed their support for the project but some questioned logistics, from building two sites at once to how the centers will be sustained financially after the state funding expires.

Commissioner Gladys Mitchell, who represents the Sacramento area, asked whether the team has considered starting with one center before expanding.

"I like your big picture thinking," she said. "My question is because you are thinking so big ... have you considered maybe just doing one site to start with so it's not so big to scale?

"It's kind of like purchasing two homes at one time and moving into both at the same time," she added.

Tullys said that they decided to open two sites to serve two distinct populations in Santa Clara County — primarily youth of color on MediCal in San Jose and commercially insured young people in North County. They also wanted to respond to a "high level of need" in Palo Alto, Tullys said.

Working with different demographics will also provide "richer" data and lessons learned for implementing this model in other counties, noted Steven Adelsheim, director of the Center for Youth Mental Health and Wellbeing. Other California counties as well as sites in New York, Michigan, Illinois and others, have expressed interest in creating a headspace-like model, according to a lengthy project plan description submitted to the state.

State Sen. Jim Beall, D-San Jose, who serves on the Mental Health Services Oversight and Accountability Commission, said members of a state mental health caucus are also interested in pursuing legislation to promote such clinics in their communities.

"There is a lot of interest in this," Beall said.

The question of the centers’ long-term sustainability remains unanswered, but the group said there is "high interest" in pursuing public-private partnerships. The Stanford Center for Youth Mental Health and Wellbeing has received "multiple requests" from foundations who are interested in supporting the clinics, the plan description states. They will also likely rely on Mental Health Services and Supports funding from the state.

Santa Clara County is allocating $8.7 million to cover its own personnel and operating costs as well as evaluation of the centers. The county is paying the Stanford Center for Youth Mental Health and Wellbeing $1.7 million for the part-time clinical staff who will work at the sites and $1.4 million for a technical assistance team (which includes a medical director, education/employment specialist and evaluation implementation scientist).

A 'first of a kind' model

The Santa Clara County centers will bring mental health and primary health care services, substance use treatment, education and employment under one roof. The project plan describes this model as "'one-stop-shopping,' which helps to prevent stigma when accessing mental health services for young people."

The staff will be made up of psychiatrists, psychologists, physicians, substance use treatment counselors and others. The Stanford psychiatrists and psychologists will be part-time, according to the project budget.

The team envisions the clinics as culturally and linguistically inclusive and making an effort to reach vulnerable and marginalized young people, including LGBTQ, homeless and indigenous youth. They will not turn anyone away, Tullys said, and are working to develop a blended model that accepts both private and public insurance.

Stanford and Santa Clara County's Behavioral Health Services Department will primarily provide the direct psychiatric and psychological services, while community organizations will provide peer support and case management. Partnerships with community organizations will also allow for other services to be provided directly to young people at the clinics and to make it easier to refer teens out to other programs.

A youth advisory group, made up of 27 diverse teenagers from throughout the county, is providing feedback on everything from specific services to hours the centers should be open to what the physical spaces should look like. The teens are working with Palo Alto design firm IDEO on branding and design. The youth group will continue to advise and evaluate the centers after they open.

The county is also working with a vendor to collect data and evaluate the centers.

Derek Zhou, a senior at Palo Alto High School, described to the commissioners the difficulty of accessing mental health care locally. He said he went through an "endless spiral" trying to find a therapist that would accept his family's insurance and that he connected with. And as a young Asian-American man, open conversations about mental health still feel "taboo."

"I think of someone walking into the center and I feel instantly hopeful," Zhou said. "No one would have to go through the trial-and-error method I went through because a diverse group of therapists would be available. Kids wouldn't be afraid of familial or financial consequences because our services would be confidential and free."

The team hopes to identify a physical site for contract negotiations by November. They are setting aside $5 million in the project budget to cover rent for two locations.

They hope to serve at least 1,000 young people in Santa Clara County in the centers' first year.